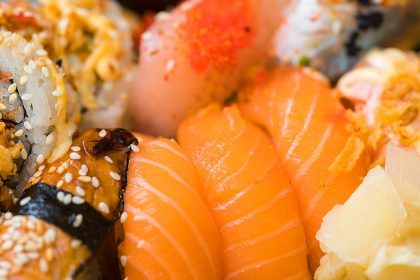 Sushi (and seafood in general) may be one of the best sources of nutrition available to us. Packed with protein, dense with nutrients, and often low in fat, sushi is an excellent way to enjoy a meal regardless of one’s dietary lifestyle choice. Sushi is an excellent source of lean protein and contains very little heart clogging saturated fat, unlike meat from terrestrial animals, and what fat is available is mostly in the form of Omega-3 fatty acids. Omega-3 fatty acids are not only a nutritional requirement for humans, but also a fatty acid that shows promise in remediating many ailments from which we suffer for lack of this essential fatty acid in our modern diet, including cardiovascular disease. The seaweed wrap used in rolls (maki), called nori, is rich with essential vitamins and minerals. Wasabi and ginger both have antibacterial qualities, and ginger is widely regarded as aiding digestion and improving circulation.

Thankfully sushi is not a particularly fattening food, and a low calorie meal is not out of the cards if you have a craving for sushi. While the rice in sushi contains a fair amount of carbohydrates, sushi can be eaten without rice (as sashimi) and in moderation, even a standard sushi item can be a healthy treat without breaking the calorie bank. As with any hand-crafted food, sushi items made by two different sushi chefs may have different proportions of ingredients, and therefore have differing values for calories, fat, carbohydrates, and protein. Restaurants may also add ingredients, such as mayonnaise, to some rolls which will increase their caloric values; so, be mindful to question these things when making your sushi selection.

Fish is widely recognized as a healthful food. High in protein and low in fat, countless types of fish are actually staples in many parts of the world. Even those fish that are higher in fat are still healthful and heart friendly, unlike many terrestrial meats that can be high in saturated fats. Most fish is high in the particular types of fats referred to as “Omega-3” fatty acids. These fats are essential to the human diet as we do not synthesize them biologically, and we must either consume the particular Omega-3s that our bodies require, or their precursor fatty acids which the body converts into the fats we use. These “fish oil” variety of these fats are originally manufactured by algae, and eventually are incorporated into the fish as they move up the food chain. The two most widely spoken of are abbreviated as DHA and EPA. These two Omega-3 fatty acids are currently being studied as they are now considered very healthful fats, alongside monounsaturated fats such as olive oil. Omega-3 fatty acids however may be better for you than you realize.

Today, Omega-3 fatty acids are considered quite beneficial to cardiovascular health and seafood consumption is suggested by doctors the world around. Many people now take Omega-3 supplements, generally called ‘fish oil’ or “Omega 3 Oil,” to incorporate more of these fatty acids into their diet, which is perfectly fine, however we would like to remind our readers that deep, cold water fish are also excellent sources of Omega-3 fatty acids, and tasty too, so keep eating that sushi!

As with any raw food there is some degree of risk of foodborne pathogens, but with seafood the current hot topic is contaminants. Basically, the answer to the question “is sushi good for you” is a resounding ‘yes’, however anyone eating fish, especially raw should be aware of the potential health concerns. The recent talk is the contaminant such as heavy metals that can be present in some fish, especially the larger predatory fish such as tuna and swordfish. Essentially, the higher up the food chain a fish is, the the more contaminants concentrate. While studies swing wildly one way or another, there clearly is some degree of heavy metal content in the larger predatory fish, but the health questions to focus on are to what degree and how much is bad for you.

Due to the potential for contaminants such as mercury (as well as pathogens) pregnant women are told to avoid the larger, predatory fish, and any raw meat, something that those with weakened immune systems are told avoid as well. However, in moderation, any cooked seafood is not only safe, but a healthful choice due to the beneficial nutritional profile of sea foods in general and the presence of Omega-3 fatty acids, required for proper health. Traces of other contaminants have been reported as well (e.g. PCBs, flame retardants) however studies have not shown the presence of concentrations large enough to hurt someone who eats seafood in moderation. Essentially, by polluting our planet we are soiling our oceans and its denizens as well, a process that reverberates throughout the food chain and finally affecting us. Naturally occurring substances (e.g. mercury in seawater) also contribute to contaminants found in fish as well. Fortunately, a recent report from the Institute of Medicine has concluded that the benefits of eating seafood far outweigh the potential risks, and anyone worried about the potential health concerns would do well to review the article. A recent article by the New York Times highlights the increasing risk of mercury contamination in tuna, and while it was countered by a recent trade group press release, the research was again supported by an article published in Newsweek magazine. As with many foods, eating sushi does in fact carry with it some small risk of pollution related contaminants being consumed, however in moderation, it is a perfectly safe food. But that said, please do remember that there can be other risks.

Aside from contaminants, raw seafood can also be the vector for various pathogens, viral, bacterial, as well as larger parasitic creatures. Proper sanitary conditions must always be met or any raw food could possibly make one sick. Anisakiasis is a particularly nasty and potentially fatal infection caused by microscopic larval worms that live in some marine creatures that can be avoided by thorough cooking, or certain deep freezing techniques, which are required by law in the United States for certain sushi grade items. While rare, it is one of the many risks inherent in all uncooked sea foods. Fortunately incidents of illness from sushi are few and far between. More people are sickened by contaminated produce in the US than by sushi, so at least for now, purveyors of sushi seem to be maintaining proper sanitary practices. And before you ask, tapeworms require a freshwater stage in their life cycle, so as long as you stick to the saltwater fish you should be fine. No one should ever eat freshwater fish raw under any circumstances as the risks of parasitic infection increase dramatically due to the large number of freshwater parasites that exist, the freshwater ecosystem being a much better environment for parasitic creatures.

Fortunately, sushi is as safe as any other food as long as proper handling conditions are met. While certain individuals should take steps to minimize particular risks due to their current condition, for most people, sushi is as safe as it is good for us. That said, it is wise to make sensible decisions as to where you will be eating sushi, and if an establishment looks as though it may not be taking the proper precautions, it is best avoided. Be smart and you should have no problems finding an enjoyable and delicious sushi meal.