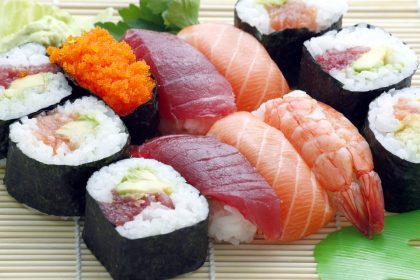 Beginning as a method of preserving fish centuries ago, sushi has evolved into an artful, unique dining experience. In its earliest form, dried fish was placed between two pieces of vinegared rice as a way of making it last. The nori (seaweed) was added later as a way to keep one’s fingers from getting sticky.

Technically, the word sushi refers to the rice (the Japanese word su means vinegar, and shi is from meshi, the Japanese word for rice, hence sushi is ‘vinegared rice’), but colloquially, the term is used to describe a finger-size piece of raw fish or shellfish on a bed of rice or simply the consumption of raw fish in the Japanese style (while sushi is not solely a Japanese invention, these days, the Japanese style is considered the de facto serving standard). This can be eaten as is, or is often dipped into shoyu(Japanese soy sauce) and then eaten. Great care is taken in the creation of the dish and the many methods of preparing the food indicate the importance of appearance to the educated consumer. Sushi is a work of art as much as a food, and while it is now available in a western ‘quick and easy’ serving style, the traditional ways are far from lost.

What are the different kinds of sushi?

Sushi comes in many forms, depending on how the item is presented. Some sushi can be eaten with the hands, and some with the chopsticks, and each style of sushi has its own unique shape and composition. The sushi chef (itamae) may plate your sushi in a more formal and straight forward manner, while at other times, an item such as sashimi may be arranged in a beautiful floral pattern, for example. An entire platter of sushi may be a garden of food at your fingertips. While the presentation of a meal may be part of the sushi experience, there are certain standard types of sushi, and they are:

There are also more specific terms for the rolls depending on the style. They are:

The fish in sushi can also come in a few different forms and styles, apart from the plain piece of fish. You might see:

Sashimi is raw fish served sliced, but as-is. That means no rice bed or roll, but it is often served alongside daikon and/or shiso. This is my favorite style as you really get the flavor of the fish. Plus, it’s a great way to impress sushi newbies!

Sashimi is often cut in different ways to enhance the appearance of the fish. Hira zukuri is the standard rectangular shape cut. A thinner cut is called Ito zukuri, and is often no more than 1/16 inch thick. The thinnest, called Kaku zukuri is paper-thin and is often presented in a pattern.

What are those other things I see on my plate?

Depending on what you ordered and the whim of the chef, you might see items such as wasabi (the hot green Japanese horseradish-like rhizome), gari (pickled ginger, which comes in both a pink and a light tan color, with the lighter stuff usually indicating better quality). You may also see a large green leaf called shiso, which is often served with sashimi, and a shredded white mass of Japanese radish called daikon, which is also often served with sashimi.

Where can I find sushi grade seafood online?

[about to post new link] has the best sushi grade seafood available, in my opinion. Check them out for almost everything you could ever want.

What do all these words mean? (i.e. terminology)

Since the list is rather extensive (and by no means complete), I have devoted an entire page to sushi terminology which also includes a pronunciation guide.

How to use chopsticks

Think of the chopstick as a pair of prongs, the only difference being that there are two separate parts or sticks. One stick is held in stationary position and the other is moved.

1. Take one stick first and hold it in your right hand in the way you would normally hold a pencil. If the stick has a thick and a thin end, hold it so that the thick end is to the top.

2. Keeping the fingers in this position, turn your hand inward until the stick is horizontal to the table and parallel to your body.

4. Now, take the other stick with your left hand and let the thick end rest on the protruding part of the ring finger of your right hand. Slide the stick towards the right, touching the tip of the middle finger and passing under the thumb until the thick end rests at the base joint of your forefinger. This is the stationary position of this stick, and it should be roughly parallel to the first stick.

5. Alternately bend and extend your forefinger and middle finger, letting the first stick PIVOT at the thumb. The thin tip of the moving stick will touch that of the stationary stick when you bend the two fingers. Don’t hold the sticks rigidly. Hardly any pressure or strength is needed to grasp things at the tip of the chopsticks.

A Short History of Sushi

What is Gari (ginger)?